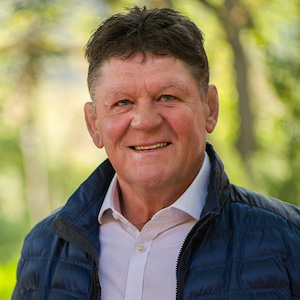 Panel Discussion: How to differentiate your brand and customer experience

Born in Laingsburg in South Africa’s Karoo region in 1960, Hein earned himself qualifications in winemaking from the respected Cape Institute for Agriculture Training at Elsenburg at Stellenbosch University in the Cape Winelands.  Embarking on his career as winemaker in 1984 at Spier Wine Estate, Koegelenberg later joined Windmeul Cellar in Paarl, moving through the ranks from Assistant Winemaker to Chief Winemaker and ultimately CEO of the co-operative winery before becoming CEO of La Motte in 1998. Under his leadership, La Motte wine estate has internationally acclaimed wine tourism offering.

In 1999 he formed Leopard’s Leap Wine in collaboration with his late father-in-law, the internationally respected industrialist and conservationist Dr Anton Rupert. Under Hein’s management, Leopard’s Leap has become a global brand known for its support of conservation efforts to protect the Cape Mountain leopard.  Hein was also one of the founding members of Meridian Wine Merchants, one of the foremost wine marketing and sales companies in South Africa, and Historic Wines of the Cape, a logistic wine company offering wine services to some of South Africa’s finest wine producers.

In 2014, Hein was acknowledged by the Institute of Cape Wine Masters as Wine Personality of the Year in recognition for his major contribution to the South African wine industry.  He is the Chairman of the Board of the Franschhoek Wine Valley association which looks after the promotion of the wine and wine tourism in the Franschhoek valley where La Motte and Leopard’s Leap are based. Hein takes a special interest in developing the South African wine tourism offering in Asia.  He is also chairman of L’Huguenot Wines, a joint venture formed in August 2011 between Leopard’s Leap Wines and Yangzhou Perfect, a division of Perfect (China) Co.  The partnership owns the L’Huguenot wine brand, which is exported to China and which has seen China’s first investment in the South African Winelands.

Eager to share his insights and learnings from the world of wine, Hein also writes a weekly blog, HeinonWine – heinonwine.com