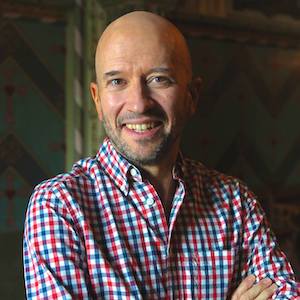 Joe is known around the world as “Obi Wine Kenobi”, the expert presenter on The Wine Show. But if you’ve enjoyed wine somewhere between Wick and Whitstable in the UK, Joe was probably involved too. For the last 20 years Joe has sold wine to restaurants, hotels, bars and celebrity weddings as one of the UK’s leading wine merchants. Today Joe guides 250 million viewers in 107 countries through The Wine Show, as well as wine lovers at sea as an ambassador to Celebrity Cruises.

Across his career Joe wrote about wine for 14 years as the weekly wine correspondent for The Herald Newspaper. And he spent years talking about it to audiences of wine-loving golfers across the USA as wine consultant to the US PGA Tour. In 2017 Joe has won both the IWSC Wine Communicator of the Year Award and IWC Personality of the Year. In 2018 Joe was named 22nd in the 100 Most Influential People in Wine by Drinks Retailing News, the highest placed media figure on the list.

It’s an unlikely career for someone who began as a university academic. Between researching his MPhil on Food & Religion and teaching Structuralist Food Theory and Hotel Valuation Models, Joe wrote the world’s first textbook on selling and marketing wine in restaurants. A book still used in universities over 20 years later. In 2016 he was a nominee for the Wine and Spirit Education Trust Outstanding Alumni Award. This is a new annual accolade to celebrate a WSET Diploma graduate who is notably contributing to the industry.

Joe has presented television and radio programmes on much more than wine. These include Joe’s Diner, a series of films on food history for BBC North, and It’s Your Money, BBC Radio Scotland’s flagship personal finance programme. He was a regular for five years on BBC Radio Scotland’s ‘Fred MacAulay Show’ as well as presenting programmes covering food, business affairs, music, health, politics and personal finance.

Joe is an experienced and accomplished speaker. Today he hosts everything from dinners in Glasgow to industry conferences in Argentina. Joe has written for all the UK’s wine magazines and a range of American lifestyle publications. Never shy of controversy, he once wrote the ‘most complained about article’ ever published in Decanter Magazine.

Today Joe is roughly one third the man he used to be. Early in his career he lost six stone and now balances the food and wine that comes with his job by competing in Ironman triathlons. He has first hand – if somewhat unscientific – expertise on weight loss.