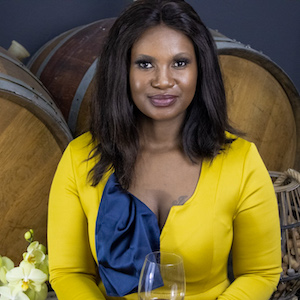 Siwela is a biotechnologist, winemaker and owner of Siwela Wines.  She was born in Soweto and raised in Marulaneng-ga-Mphahlele, a small village in Limpopo.  She studied biotechnology at Cape Peninsula University of Technology in Cape Town.  As part of the programme she majored in microbiology and fermentation focusing on various scientific processes involved in wine making such as growth kinetics, microbial activity, factors and controls during fermentation, nutrient and substrate uptakes during the winemaking process.  It was during her studies that she began to have an interest in winemaking and her curiosity in the field began to deepen.  Unlike many wine professionals, Siwela didn’t grow up in a wine region nor winemaking family.  In fact, she had no prior knowledge because they didn’t make wine up north, but she navigated into wine through Biotechnology.

Siwela embarked on a series of internships, part-time and full-time roles within the wine industry in the heart of Stellenbosch.  During this period she worked throughout various departments such as the cellar (production), sales and quality in wines and spirits.  She continued with her wine education both formally and informally leading to various accolades and certificates in wine.  While working in the industry, she realised the need for transformation within the sector, she then decided to establish her own brand, with the aim to inspire other young people to be active role players in the industry.  In the past years, Siwela has been invited as a speaker on numerous platforms including a lecture focusing on the wine business and related topics, to 15 masters students from the University of Gastronomic Sciences, Italy.